Chef Loke
He had a very distinguished career as a chef in Korea for 18 years before moving to Hawaii. Had the privilege to serve the Korean President on two occasions, specializes in authentic Korean dishes and infusing it to local flavours. Heads Korean National Day celebration dinner functions for the Korean Embassy. He has also appeared in several TV programmes and has been featured on local magazines and media print sharing his recipes to the public. 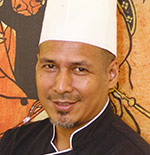 Chef Tambi Shah
One of the pioneers in Saisaki since 1999, Head Chef Tambi Shah started his culinary training at the age of 21. He was attached to Regent KL as Senior Chef de-Partie, and awarded The Best Traditional Homemade Japanese Soba in 1994 at PWTC, Kuala Lumpur during the Inter-Hotel Competition. In 2013, Chef Tambi made his first television appearance on The Breakfast Show on NTV7. He then was requested back for the next season by popular demand. Highly skilful with Japanese cuisine preparations from sushi & sashimi, teppan, agemono & nimono. 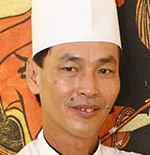 Chef Voon
25 years of experience and specializes in Chinese fine-dining cuisines with 2 years in Taiwan, storming out dishes like Sharkfin Soup, Buddha Jump Over the Wall, Braised Goose Palm and Peking Duck to name a few. He has worked in establish Chinese restaurants and hotel banquets over the years. 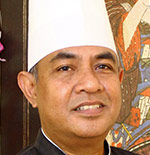 Chef Razali
Past working establishment at KL Hilton & Penang Mutiara Beach Resort as the pioneer team during its opening. Accumulated 35 years of culinary experience as a Western Chef who had the privilege to serve our ex-Prime Minister, Tun Dr. Mahathir Mohd at Residen Hotel at Uniten.

Chef Shopian
Traditional malay cuisine chef prepares our local flavours with 15 years in the industry. Also well-known for Western cuisine preparations when he was attached with prominent Golf Clubs before joining Grand Saisaki. 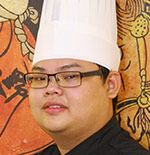 Chef Hope
Chef Hope our Pastry Chef gain recognition with gold medals as Dessert King for two consecutive years 2013 & 2014 by Asian Pastry Club. In 2011, he achieved 3rd placing in National Bakery Competition among bakery colleges. In Shogun, he has introduced his homemade recipe of the famous Durian Cheese Cake and first ever halal Tiramisu (non-alcoholic base). 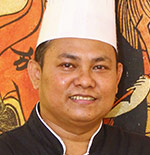 Chef Wira
Authentic Thai cuisine is Chef Wira specialty with 20 years experience starting his career at the age of 19. Apart from Thai cuisines he infuses them with Chinese & Western preparation methods.

Be the first to know about new products, special offers and recipe ideas.